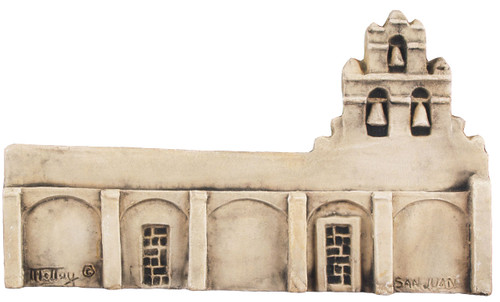 Originally founded in 1716 in eastern Texas, Mission San Juan Capistrano was transferred in 1731 to its present location on the east bank of the San Antonio River. In 1756, the stone church, a friary, and a granary were completed. A larger church was begun, but was abandoned when half complete, the result of population decline. By mid-century, San Juan, with its rich farm and pasturelands, was a regional supplier of agricultural produce. Orchards and gardens outside the walls provided peaches, melons, pumpkins, grapes, and peppers. Corn, beans, sweet potatoes, squash, and even sugar cane were grown in irrigated fields. In 1762 Mission San Juan’s herds were reported to include 3,500 sheep and nearly as many cattle. This thriving economy helped the mission to survive epidemics and Indian attacks in its final years.